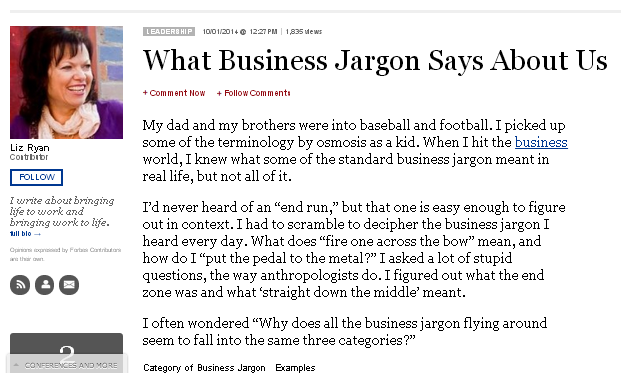 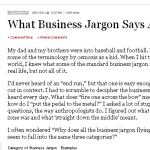 Liz Ryan  has written a piece at forbes.com titled “What Business Jargon Says About Us“.

I found two things particularly interesting. Firstly the fact that most jargon relates to sport, war and cars:

Over time it occurred to me that these activities — playing or watching sports, fighting enemies and driving cars as fast as they can go — are all archetypes for the things guys wish they were doing instead of signing Purchase Orders and installing software on their computers.

And secondly how these archetypal male terms can alienate women:

What’s most striking to me about the constant barrage of cheesy business slogans like “Let’s kick ass and take names!” is that the macho language of business reinforces the most juvenile, anti-human and ultimately self-destructive aspects of business.

Liz finishes with challenging the use of metaphors altogether:

We need to feel human at work. Elevating a simple business conversation to a battle between the forces of Light and Darkness fills in the gap. It is time for us to tell the truth about the broken state of business and institutions, and replace fake, little-boy’s-fantasy meaning with real human meaning.

But if real human meaning is too challenging at times, how about some metaphors from the Great British Bakeoff? No one wants their report to have a “soggy bottom”, or their project plan to “lack crumb”.

Found by @Haypsych via @humanworkplace. Read the full piece at www.forbes.com