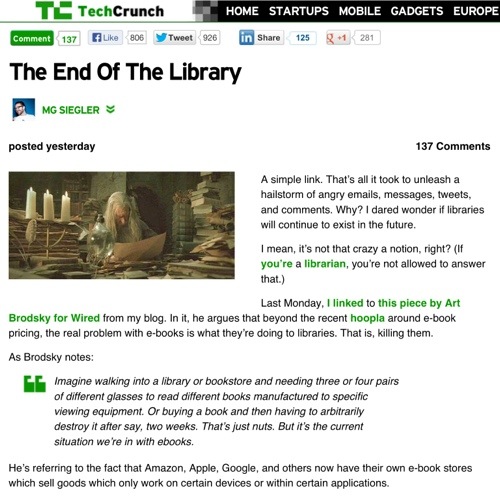 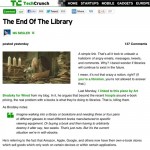 MG Siegler, a general partner at Google Ventures, has written a piece for TechCruch considering the viable future of the local library, a subject which can polarise opinions.

It came about from another article on Wired.com – The Abomination of Ebooks: They Price People Out of Reading which reports on the ebook pricing and distribution model.

Some highlights of the piece:

“while the economics of e-books at a library should theoretically be better (since there is no more physical product, and any replacements or new copies are just a download away), they’re actually far worse”

“some other spaces currently known as libraries may live on as cultural and/or learning centers. Others like the notion of using libraries as some sort of newfangled technology demo pits.”

“Libraries have been an invaluable part of human history, propagating our culture and knowledge over centuries. But recognizing the changing times and pointing out the obvious shouldn’t be considered blasphemy. It is what it is.”

“The reality is that learning has evolved. It’s now easier than ever to look something up. And the connected world has far better access to basically infinitely more information than can be found in even the largest library — or all of them combined.”