A friend and ex colleague has recently returned to blogging with aplomb, posting a piece about being a recovering perfectionist.
It made me think about a recent BBC drama Castles in the Sky, telling the story of Robert Watson-Watt’s development of the first radar in WWII. An inventive scientist who pulled together an unlikely team to create an early warning system to alert the RAF that German bombers were on their way.

He justified the initial limited ability of the system by saying

“Give them the third-best to go on with; the second-best comes too late, [and] the best never comes.” 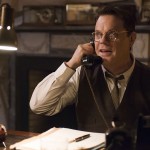 edback. Sometimes it’s more important to deliver a basic product a for people to use than hold back until you can offer the complete (or perfect) experience.