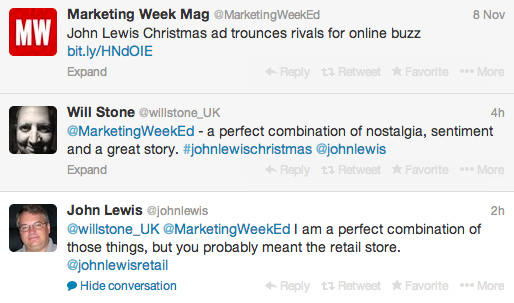 The John Lewis Partnership hasn’t been fortunate enough to claim the @johnlewis twitter account, it was snapped up in 2007 by another John Lewis from Blacksburg, Virginia.They had to settle for @johnlewisretail.

But they didn’t cause a fuss, and @johnlewis has embraced his fellow John Lewis and has been given the title of  The most patient and polite man on twitter by BuzzFeed.

His politeness has been rewarded by a hamper of tech gifts from the department store. A relatively small cost for the 300K views the buzzfeed story has achieved alone.

Thanks to @johnlewisretail for sending me a new macbook and lots of other goodies, with a nice letter signed by lots of folks from JL HQ.