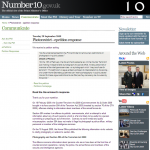 Thanks to the online photographer for highlighting the PM’s response to an e-petition on photography laws. Currently the law states:

Section 58A makes it an offence to publish, communicate, elicit or attempt to elicit information about any of such persons which is of a kind likely to be useful to a person committing or preparing an act of terrorism.

Which has been mis-used by many police officers to ban members of the public from taking innocent pictures (which I’ve talked about before here: Photography presents a unique problem for law enforcement because it is not illegal).

The response is as useful as the law:

An officer making an arrest under section 58A must reasonably suspect that the information is of a kind likely to be useful to a person committing or preparing an act of terrorism.

While also stating that:

It is a statutory defence for a person to prove that they had a reasonable excuse for eliciting, publishing or communicating the relevant information.

I’m so glad that’s all cleared up.